Freddie Mercury playing the drums during a rehearsal for Queen's News Of The World tour at Shepperton Studios in October 1977. Picture: BBC Archive/Youtube

Footage has emerged of Freddie Mercury playing the drums and Roger Taylor on the guitar, during a rehearsal for Queen's News Of The World tour at Shepperton Studios in 1977.

Freddie Mercury may be known as one of the greatest vocalists of all time, but few are aware that the Queen frontman was a dab hand with a drum kit.

While it is widely known that Freddie Mercury played the piano and was competent on the guitar, it is believed the footage is the only time Freddie was filmed on a drum kit during his time with Queen.

The extraordinary moment between the Queen band members comes from a clip of the band's rehearsals for their forthcoming North American News Of The World tour. 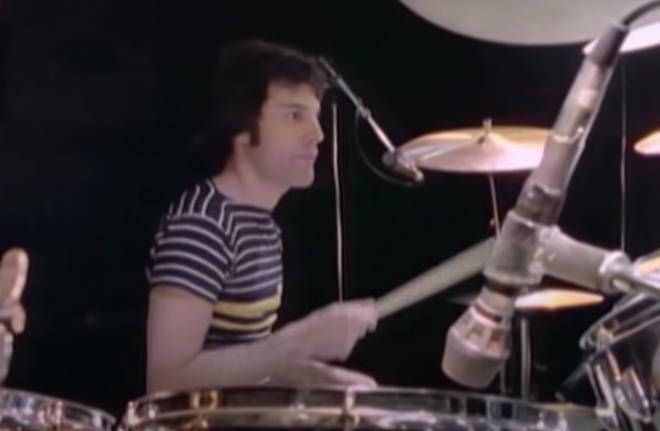 The footage was part of a documentary filmed by the BBC and presented by music presenter Bob Harris and saw the documentary crew be granted exclusive access to the band as they practiced the set from their new self-produced, stripped-back album.

The tour was jam-packed with new songs, including 'We Will Rock You' and 'We Are The Champions', that would go on to become some of the famous anthems of all time.

The band's News Of The World tour was a huge success, spanning from 11 November 1977 to 13 May 1978 and growing to incorporate Europe and the UK.

Yet despite the documentary following the band on the US leg of the tour and being given extraordinary access and exclusive interviews with all four members of Queen, the footage was not released until over 40-years later, in 2018.

After 50-years in the industry as a radio and TV presenter, in February 2018 Bob Harris spoke to Louder Sound about his time with Queen and the friendships he cultivated with the famous foursome after the time they spent together in 1977.

"Freddie Mercury was lovely, bright, sensitive, and quite vulnerable, funnily enough, when you think of his larger-than-life stage persona," Bob Harris recalled.

"One of the things about Freddie was that he was very civilised and quite ‘English’. I’d go over to his flat near Shepherd’s Bush in the afternoon, and he’d get out the fine china and the sugar lumps and we’d have a cup of tea.

"We also did some filming in America for their 1976 tour, and I travelled with them to Las Vegas where they played the Aladdin Hotel.

We stepped off the plane, straight into four waiting limos – I was travelling with Roger Taylor – into Vegas and to the Aladdin, where we were all given different names and ‘coded’ into our rooms," the presenter explained.

We arrived in Las Vegas on Monday, and the band weren’t playing until Thursday, so we had three days to party. Me and Roger started at the top of the main entertainment strip, and worked our way down, going into every single place, placing a bet in one, going across the road to watch a band, into the next place to watch the wet T-shirt contest…

"On the Thursday, when the band were playing, they got the four limos to park at the back of the Aladdin, each of them got in, then the limos drove them round to the front, where they got out and walked into the hotel for the gig.

Spanning three continents and 46 huge stadium shows, the band's News Of The World tour put the band on the map, with the Los Angeles Times calling it Queen's "most spectacularly staged and finely honed show yet".